Causatives and their Passives in Sanskrit: Poster presentation at LFG 2019 (Canberra, Australia) 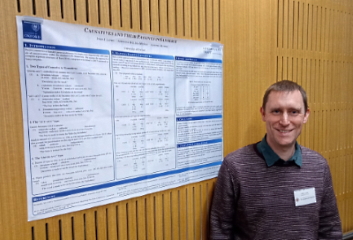 We present data of morphological causatives, and passives of causatives, in Classical Sanskrit. The data proves problematic for any attempt to produce a single crosslinguistically valid model of causativization within the standard LFG mapping theory approach. There are two argument structure patterns found with causatives of transitive verbs in Sanskrit, and we must either admit that these are produced by distinct causative argument frames (although the causative morpheme is the same in both cases), or else we must admit crosslinguistic variation in the order of mapping argument slots to grammatical functions, in order to account for the difference between passives of causatives in Sanskrit and in modern Indo-Aryan languages. We assume the approach to complex argument structures of Butt (2014), integrated with Kibort’s (2007) universal valency template (as also presented in Dalrymple et al. 2019).

The Indo-European transitivizing/causativizing present stem formation in -éye/o-, with o-grade root, survives in a number of Indo-European languages (e.g. Greek φοβέω ‘put to flight’ to φέβομαι ‘flee’, Gothic satjan ‘seat’ to sitan ‘sit’), but becomes particularly productive in Sanskrit (and Indo-Aryan more generally). The early history and functionality of the causative formation in -áya- in Vedic Sanskrit has been well investigated by e.g. Jamison (1983), Kulikov (2013). But its later history in post-Vedic Sanskrit remains less well explored, although this is also important for a full understanding of this inherited morpheme.

In this paper we present data and draw conclusions from a new large-scale corpus search of late Vedic and post-Vedic Sanskrit texts, which altogether amount to more than five million words. We focus here on a typologically rare construction that is well attested in Sanskrit: passives of causatives. As noted by Bubeník (1987), it is crosslinguistically rare for causative constructions to be freely passivizable. But in Sanskrit, the productivity of the causative construction, combined with the even greater productivity of the passive, licenses a relative freedom for passivizing causatives. Our investigations into passive causatives reveal new insights into the function of both the passive and the causative in Sanskrit.